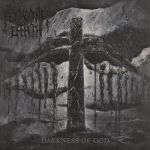 Third album from this band from Czechia, where the leader is their guitar player Tomas Halama, who played in another great band from that country BRUTALLY DECEASED, a band which I recommend a lot if you are into old Swedish Death Metal and a few touches of the NY Death Metal of the 90s. Well, this band started as more or less a band very influenced by masters MORBID ANGEL, even the name will tell you about that. But after a few years the band has evolved, including in the process a lot of line-up changes and now they seem to find a style of their own. There are still reminiscent of the unholy sons of Floridian Death Metal masters, but now they added a more technical approach, while still keeping very direct, thus making an album that requires many listenings to open the portals of despair. Some dissonant passages, some chaotic parts, some great melodies that always conjure darkness… it is all here. At times the aura I find here reminds of bands like GORGUTS or DEATHSPELL OMEGA and maybe even a few of ULCERATE. To notice the killer rhythm section with a great bass playing and the fantastic drums courtesy of Italy’s Giulio Galati from the band CONTINUUM OF XUL. This is music that defies the senses, that takes no conformity that looks to expand boundaries. They call it cthonic Death Metal and alas it shall be like that. Very mystic and if you can feel the music in its primordial essence this is like a anti-cosmic invocation for greater beasts. This is the kind of music that still makes me a Metal underground fan. Contender for album of the year. www.facebook.com/heavingearth, www.facebook.com/lavadome