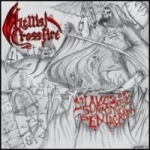 I would not dare to say that German Thrash Metal celebrates a reincarnation, but the underground spawns out some great hordes every now and then (if we are just thinking about the WITCHBURNER General or the Master NOCTURNAL eclipse). HELLISH CROSSIFRE are maniacal and skilled enough to rank into the current five best Thrash Metal hordes out from Germany, without any restrictions. Even if the band exists only since 2002 and went through many line-up changes they already know how to create the Thrash Metal we want to hear and once have meant to be. So, you can expect a rough, brutal and even dark Thrash Metal, no funny shit telling us meaningless things. I especially would like to point out the guitar work of “Iron Incubus” Chris and especially the brutal and evil voice of singer “Iron Tyrant” Thomas (reminding me on Jeff Becerra). Fast thrashing Metal is the game – here and there some pounding moments (just listen to the beginning of track number five ‘Shadowcurse’) are to be found as well. “Slaves Of The Burning Pentagram” is HELLISH CROSSFIRE’s debut album and got released until now only on vinyl-format in a limited edition of 500 copies. Homicidal maniacs will like it… www.ihate.se