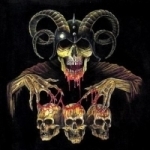 VIOLENT ATTACK from Paraguay and HELLISH CROSSFIRE from Germany join forces under Proselytism Records’ flag to release this demo compilation. Included are VIOLENT ATTACK’s "A Demo Of Violence" from 2002 and their "Rehearsal 2003" plus a SABBAT cover (recorded live in 2007). Also HELLISH CROSFIRE’s "Unholy Tyranny" 2004 rehearsal and "Unofficial" rehearsal tape (from 2005) that includes a KAT cover. My respects to all of you who know KAT. Oddly enough and being in countries so far away, both bands dwell in the same style of old Speed Metal bordering on Thrash with some Death / Black Metal influences. How’s that for a description? This is a weird listen, since both are ‘new’ bands that sound ‘old’, if you get my idea. This release is a tribute to the mid-80s Metal scene like EXCITER, SATAN, early KREATOR, POISON and a little DEATH YELL thrown in. Now, this is a demo / rehearsal compilation. Be aware that the sound quality is not perfect and it varies from time to time. But everything is audible and enjoyable. VIOLENT ATTACK’s side has better production and a total 80s sound. The vocals have a weird "inside a card box" sound but using high pitched screams that fit the atmosphere. Although a little sloppy and somewhat simple, the music has that undeniable South American vibe. Following up we have HELLISH CROSSFIRE. These guys base their sound on tremolo guitar driven riffs, a faster approach and harsh vocals. They sound like a less Black Metal oriented AURA NOIR, in my humble opinion. The musicianship is slightly better and more aggressive on this side of the split. Fans of the aforementioned bands and mid-80s sound need to check out this release NOW (it is packaged in a very cool 8 panel, foldable 7"- sized digipak – Frank)! You have been warned. Contacts: www.proselytism.net, www.myspace.com/kuraviluprods, www.myspace.com/hellishcrossfirethrash