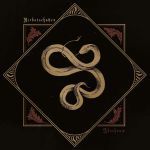 During the last few years, a pretty strong and vivid Black Metal scene established in Germany, bringing a lot of pretty interesting bands to light with a great variety of music. But under the widely visible surface there are some still unknown and new acts who indulge in the dark arts as well. One of these still unknown acts is HERBSTSCHATTEN, a four piece from Hamburg that sings in German. Formed more than a decade ago as a nameless project, they chose their name in 2011 and released the first album “Liv Og Død” in 2013 independently. Some line-up changes led to a little break in the story of HERBSTSCHATTEN until the band found its recent line-up in 2018 and released the EP “Bergtempel”, again on an independent basis. With the now stabilised formation, the second full length “Abschaum” now is the first release for a record label. And it is a pretty unique album, as it is more than pure Black Metal. HERBSTSCHATTEN blend their compositions with licks and beats that remind of classic Metal and structures and ideas that seem to be influenced by the progressive music of the 1970s. This variety and complexity makes especially longer songs like ‘Der Kutscher’ or ‘Gletscherbestie’ an interesting experience. The interspersed spoken word parts in Norwegian (yes, that’s a little confusing!) add their own special flavour to the songs. But as enthralling and fresh this might sound, there still is a little step to take for the quartet. In some moments, the compositions sound not completely fluent, as if the parts were cobbled together. If they get the hang of that flaw, HERBSTSCHATTEN might become a poster child for the German Black Metal scene. The final ‘Hingabe’ proves that they have the potential to take that step. Visit them at www.facebook.com/herbstschatten or check their company www.boersma-records.com