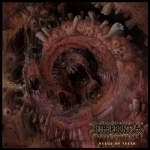 When will the Killtown Death Metal craze fade out? Personally I don’t hope it will soon, I like the grimy heavy dark doomy skullsplitting Death Metal that drags itself across the mortuary, like a decomposed priest, trying to flee the bowels of hell, and judging by the sold out Killtown Death Fest ’18, that I attended a couple of months ago, I’m not the only fan out there. It was at the same festival that HYPERDONTIA had their live debut, and the band was quite well received, the room was stuffed with rancid Death Metal fans, enjoying the downtuned guitars, blasting drums and guttural pukes. HYPERDONTIA consists of quite well known figures within the scene. David Mikkelsen from UNDERGANG (and a good deal of other bands) on vocals, Mustafa Gürcalioğlu (from ENGULFED) on guitars, Malik Çamlıca (from DECAYING PURITY) on bass and Tuna (from PHRENELITH) on drums, so quite a line-up with a good deal of years, bands and experience on hand. And since the recording of "Nexus Of Teeth" Matthias from the uprising rippers TAPHOS (remember that name!) has been added on guitars. The music takes its offset in late 80s, early 90s grim doomy Death Metal with the right feel and intensity. The atmosphere is thick as fog and drenches you in eeriness and despair, as you don’t know what is hiding behind your back. The songs are really well crafted, and even though we have heard this music a ton of times before, it all feels new and exciting. The boys for sure know, what they are doing. The riffs are heavy and precise, building up a good deal of the atmosphere, especially with the psychedelic to eerie leads being laid all over the place. The bass is keeping the bottom rock solid and dark, and the drums are pummeling away, with solid precision and great variation of pace. And the vocals, yeah, it is trademark Torturdød, do I have to write more? There have been a great deal of good Death Metal releases this year, and this is yet a contender for the best album for me. It has the right atmosphere, intensity and dedication. You can really feel these guys are burning for their music, and its delivery, and that reflects a hell of a lot on the power of the output! Enter the deluge of ashes: www.facebook.com/hyperdontia, www.darkdescentrecords.com