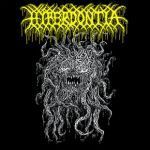 It was completely right that the debut “Nexus Of Teeth” was ranked amongst the Top Ten albums in 2018 by the Voices staff and readers poll. The ultra compact wall of Death Metal bulldozed almost everything in its way. Heavy influenced by INCANTATION, IMMOLATION and MONSTROSITY the band (consisting of current and ex-members of BURIAL INVOCATION, UNDERGANG, PHRENELITH and a few more) managed to forge brutal, but at the same time technical varied songs without losing the grip for an unholy atmosphere. This current release is a compilation of different songs, we have the opening title track, which was recorded at different locations in late 2018 and early 2019. Having in mind the debut clicked at 34 minutes, the song (great title) should have been on it, since it shows all facets of HYPERDONTIA. The next two songs (‘Internal Incineration’ and ‘Majesty’) have been recorded live in Istanbul and overworked in the studio. From my point of view I never understood this afterward mixing and mastering. To me the two tracks simply sound like recorded in a studio. The last three tracks (‘Stapled Down’, ‘Internal Incineration’ and ‘Malicious Concept’) were originally released as the “Abhorrence Veil” EP back in 2017, which already shows the potential of HYPERDONTIA. When it comes to the music no doubt, exquisite Death Metal, but somehow I do not understand the meaning of this release. One new track, two live songs which do not sound live and a two year old EP, I guess this output is rather for fans of the band who are keen on collecting all and everything of their favorites. All who feel attracted should visit www.facebook.com/hyperdontia and www.darkdescentrecords.com for more information.