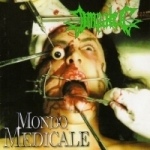 One of the hardest and demanding fates for a relatively young band, like IMPALED, is to be defamed as an everlasting copy – in IMPALED’s case this is of course the almighty fathers of cynical and brutal Death / Grind Metal CARCASS. While most bands already fail when they start to take their first steps towards the throne of such a legendary act, IMPALED show how you can enable yourself to sit next to it. Their debut “The Dead Shall Dead Remain” (2000) sadly suffered from a weak production, but gave at least a hint of IMPALED’s technical abilities and song writing talent, the “Choice Cuts” EP (2001) had improved production wise and was a good appetizer for their newest effort “Mondo Medicale”. This is definitely the album that deserves the “Best CARCASS-Copy Ever” Award for absolute great gut ripping and gore spilling Death / Metal Songs, that equal CARCASS’ not only technically but also reach the legends’ level of intensity and humour (just listen to the operation-part in ‘Rest In Faeces’). There’s not a single weak song on “Mondo Medicale” and I even made out some real highlights, like ‘Choke On It’, ‘The Worms Crawl In’ or ‘Dead Inside’ (my personal favourite). Lyrically IMPALED focus on the “medical-period” of CARCASS’ work (first three albums), while their musicianship mostly touches “Necroticism” and “Tools Of The Trade”. In addition to that, IMPALED put in their own straightness, low-gurgle vocal-parts and guitar melodies / harmonies that remind me of some old Swedish Death Metal bands. To sum it up one can say that IMPALED prove on “Mondo Medicale” that they are worthwhile heirs to the CARCASS throne and create fantastic, entertaining shit, that does not seem ridiculous when compared to the original. Great!!!