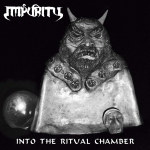 Formed back in 1989, Brazil’s IMPURITY has been playing their style of blasphemous Black Metal for well over 2 decades. This is a re-release of what is supposed to be their second album from 1996, with what is supposed to be their first album as a bonus. The thing is that I am not sure if those are EPs in the strict sense of the word as they are on its own below the 25 minutes mark. Oh, well. Whatever, they have been available again for those sick for twisted Brazilian Black Metal. Brutal, bestial and impure Black Metal. References to SARCOFAGO, BEHERIT and BLASPHEMY are the words here. Although you can sense some more traditional Heavy Metal touches here and there, specially when they play slower. The first 6 songs are of the release itself and do have a more Black Metal vibe with the high pitched screams, although it does possess a quite good production. The other songs, that are the bonus, are included in their 1993 release “The Lambs Fury”, and have a rawer sound, a more brutal approach, specially in the vocals, with an almost rehearsal like sound that was quite common in the late 80s Metal coming from South America. As an historical document and for those into brutal war-like Metal with Grindcore touches, this is quite interesting. But to be honest, compared to other similar releases, this is simply just average. By the way, that recording of “The Lambs Fury” has been re-edited recently with a re-recording done in 2014 (which to me seems pointless). Not up in the alleys of some other Brazilian acts of the same time, but surely will have some followers. www.facebook.com/impuritybrasil, http://impurity.bandcamp.com, www.greyhazerecords.com