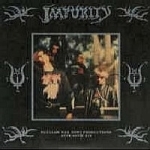 Fans of Brazilian Black / Death Metal probably already know IMPURITY from their 1993 album "The Lamb’s Fury." "Guests Of The Infernal Pit" was recorded in 1991 for the now defunct Maggot Records, and is probably one of the worst sounding 7" EPs in recent memory. For a band like IMPURITY, this is a very good thing. This is what happens with BEHERIT’s "Dawn Of Satan’s Millennium" and SARCOFAGO’s "I.N.R.I" collide on vinyl with MYSTIFIER’s "Wicca" production style. It is hideous, ultra-violent and well, impure Brazilian Black Metal at its worst (best). NWN spewed this sonic abomination late last year, unaltered from its intended 1991 configuration. It features a full colour gatefold sleeve with cover art from Bosch’s "Garden Of Earthly Delights," and full bio / lyric sheet. Songs featured are ‘Intro – Domine Satanas, Rex Infernus, Imperator Omnipotens’, ‘Lucifer Spewing Blasphemies’, ‘Malediction’ and ‘Guests Of The Infernal Pit’. As I mentioned earlier, the production is abysmal. There is little to distinguish one instrument from the other, and the vocals are just what you’d expect: utterly raw and despicable. As a bonus, the photos included were taken in the same cemetery as SARCOFAGO’s "I.N.R.I." photo session. Picture discs are available, and NWN’s signature "Die Hard" version includes postcard, embroidered patch, and silk screened envelope. If you are into the most brutal and violent Black / Death noise Metal, this is for you. Highly recommended. nwnprod.fateback.com