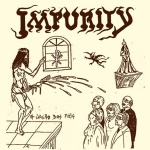 Formed back in 1989, Brazil’s long running Black Metal act IMPURITY has just released their last output in CD-R format, "Promocional Impuro" (aka "Impure Promotional") which is a compilation of songs from their 5 full length albums and their split with BLACK FEAST from Finland. Despise the simple, yet controversial cover (which looks a little childish to me), I think this compilation has its reason to be. IMPURITY have kept their concept, lyrics and image in the late 80s / early 90s. Esthetically, "Promocional Impuro" showcases their ever changing brand of Black Metal. The songs span from their first LP, "The Lamb’s Fury", released in 1993 up to their last outburst, " In The Blood…" off their split LP with BLACK FEAST (Finland), released in 2012. It is pretty hard to decide on which era is their best. It seems that, even though the band has a guiding line they have followed all these years, their music has not followed the "logical" evolution. There is definitely a good amount of SARCOFAGO and MYSTIFIER influence that you can listen to in every release. Also, one can’t deny the raw evil that lurks in their songs. They dwell between fast paced, BLASPHEMY-ish chaos attacks to slow passages full of atmosphere à la early SAMAEL. And since this compilation has 2 or 3 songs off each album, the production varies in great deal too. It goes anywhere from heavy, raw and punchy studio sound with some really interesting ideas to almost rehearsal or garage-like, sloppy and / or too simplistic. Execution wise, I think the musicianship is nothing outstanding, but matches IMPURITY’s "I don’t give a fuck… all For Satan" attitude. There is an excess of rawness in their approach, which gives a lot of strength to the music. Same goes for the vocals. Evil shrieks and gurgling, high pitched screams and an almost whispered Black Metal grunting, which reminded me of Attila Csihar. Actually, I think the vocal department adds a lot to each album. Overall, I think IMPURITY has made a good choice releasing this compilation. It’s a perfect start for people who don’t know anything about the band. There are 14 songs here and they all have their own style. So, if you are a fan of this style of primitive and chaos ridden Black Metal, "Promocional Impuro" is the release you definitely want to get. You can listen to the band’s catalogue online and contact them here: http://impurity.bandcamp.com