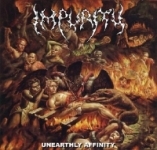 From the early 90s American Death Metal state No.1 – Florida – emerges the sinister Death Metal four-piece IMPURITY. The band was founded in 1998 and released the "Subjugation Of Mankind" demo as a self-financed MCD in the year 2000. Now their second assault "Unearthly Affinity" is unleashed upon the worldwide Death Metal scene and undoubtedly marks an impressive step ahead for the band and offers absolutely excellent dark and brutal Death Metal. Beside some rhythmical references to SUFFOCATION the main influences of IMPURITY are obviously IMMOLATION, INCANTATION or MORPHEUS DESCENDS. In contrast to many other bands in the Death Metal scene IMPURITY do not try to be the fastest, blasting band around, but vary between brutal driving parts, crushing mid-tempo and heavy double-bass attacks. The whole MCD has a mighty dark feeling and the raw yet powerful production by Juan "Punchy" Gonzalez (who also produced DIABOLIC) perfectly captures it. Songs like the title-track or ‘Masked In Bloodfall’ are bestial Death Metal tracks which show that IMPURITY respectfully pay tribute to the bands I mentioned above and add their own sense of groove and lyrical concept. Also the cover artwork has to be positively mentioned here, it was done already in the 70’s, but I guess the guy who did it would have had a bright future in the Metal scene, anyway it crowns an already great release. Be sure to support this talented dark Death Metal act, personally I can’t wait to hear a full-length CD of IMPURITY!!! Check out the mp3’s of ‘Unearthly Affinity’ by surfing to www.demonicdeath.com and get this fucking MCD!!! Contact: IMPURITY, P.O. Box 13045, Gainesville, FL 32604, USA