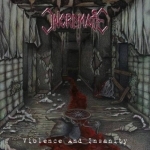 This is the second album by INCREMATE, a Death Metal band from Germany that formed in 2007 but only recorded their debut CD (and sole previous offering) two years ago. However, looking at the cover artwork, the logo, and hearing their sound, I would have believed it if someone had told me this was an early nineties underground release. And with that in mind, I started listening to the album thinking that this might offer nothing new. And I guess it didn’t. But that didn’t matter, as the whole of the CD passed by with much listening pleasure. The songs are really great and they easily transported me to the times when there was a strong and young scene for this kind of sound. In a time of super studio production and modern sounds, it is a pleasure to hear a Death Metal band that only relies on the strength of true old school Death and does its thing with three dudes who actually sound like a trio. I was listening to it all while reading the lyrics and feeling surprised at how much I was enjoying this bare bones Death Metal that is not, in fact, devoid of personality. Often mid-tempo, they also gain speed plenty of times and despite being often simple and direct, they don’t eschew the chance to show how well they can write these compositions (a track like ‘Victim of Servants’ is so good!) and the fact that they don’t abusively downtune or use super guttural voices makes it all very discernible (you can actually understand the words). Their musical approach reminds me of bands like PURTENANCE or DEMIGOD, so if you are into this kind of stuff… this is a great album to get! Proceed to www.facebook.com/incremate, http://gdr.ostmetal.de