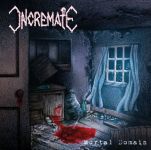 Formed in 2007, Germany’s INCREMATE went almost a decade without releasing an album. Finally, in 2016, their first full-length “Prospect Of Death” was released, and the band hasn’t stopped since. Now, in 2020, the third album “Mortal Domain” has been ushered into this world, and it’s a consistent, constantly ripping Death Metal delivery from beginning to end. And the cover art by Shannon Leslie (who has consistently provided the art for each album) is an eerie sight to behold, featuring the usual puddle of blood in the picture. ‘Streaming With Blood’ starts off the album with a furious blitzkrieg of Death Metal guitars, rapid drumming and filthy vocals that catch all the energy of the genre without veering into less enjoyable directions. ‘Complete Possession’ doesn’t necessarily bring anything new to the table. And dammit, I’m just fine with that. Sometimes all we really need is a damn good sound that smashes its way through nine tracks and 32 minutes of pure destruction. The third track ‘The Murderous Doom’ charges like an angry battalion as ‘Potent Mortality’ pulverizes our eardrums into bloody remnants. “Mortal Domain” doesn’t waste time with segues, experimentation, movie samples or any of that other nonsense that disrupts a good album. INCREMATE go right for the jugular and never stop. The guitars in ‘Retaliation’ are fairly simple yet effective, the riffs in ‘Violent Desecration’ sway and stagger in a posture of oncoming devastation, and ‘Force of Hysteria’ is just that… panicky guitars / drums and gravelly growls. The last two tracks, ‘Formed For Decay’ and ‘Death Is Stronger’ bring this hellacious, rowdy album to its brutal conclusion. Thank Baphomet for allowing INCREMATE to thunder through an entire album of pure, unadultured Death Metal at its finest. This is what we need in our lives. For more information, check out www.facebook.com/incremate, http://gdr.ostmetal.de