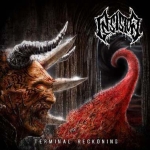 Swedish Death Metal monsters unleash their latest full length album. INSISION (sic) have been around since almost 20 years, and released their debut album with aplomb on the then sub-label of Earache Records, called Wicked World Records. Their sound was much more Swedish and upon listening to the latest one, I was left rather bewildered initially, since the band here sound more Dutch / German than Swedish. This here is a veritable mix of SINISTER meets DEICIDE channeled through the CANNIBAL CORPSE format established by the bulk of the German Death Metal bands. It doesn’t sound Swedish. The only remnant of that sound can be found in the DERANGED-esque hooks, which isn’t a bad thing at all. The Swedes aren’t really known for their brutal expression of Death Metal, and only few like DERANGED, VISCERAL BLEEDING, SPLATTERED MERMAIDS and back in the day, KILLAMAN, MURDER CORPORATION and STABWOUND managed to make a mark albeit short-lived. DERANGED remain the lords but INSISION, signed to Sevared Records, are making good headway propagating the old school sound turned brutal, retaining the elements of both, and satiating fans of both Death Metal eras. Solid music is a prerequisite nowadays, when there are tons of mediocre and faceless acts indulging in all sorts of Death Metal music. INSISION are more than solid – they’ll break your face with their sheer might straightaway and will methodically break the rest of the bones in your body too. Their attack isn’t devoid of variations and they indeed possess a few tricks under their sleeves, like in the song ‘Cold Air’, where they start off using a different approach, allowing dissonance to set in and then pummelling their way out of it with fierce determination without disturbing the momentum. It’s rather brilliantly done. Such IMMOLATION tinged moments can also be found in the closer ‘Resist’. It’s a worthy path for the band to explore in the future. The solos also lend flavour to the barbaric, bass-heavy music predominant on this album. That apart, the band fluctuate their tempos so that it doesn’t remain too intense at all times, and here is where their sensible old school influences seep in and for good reason. “Terminal Reckoning” holds appeal to the die hard meat and potatoes Death Metal fans primarily, but then also subtly pushes forward the sound of INSISION, so that the purpose is achieved and that’s how a band can continue to remain relevant. This is as solid as it can get, and within that space, it does enough to retain your attention for the 35-odd minutes of this album. INSISION are back and they’re kicking ass like nobody’s business. More info at: www.insision.com, www.facebook.com/pages/insision/167990061947, www.sevared.com