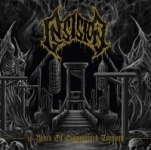 If the reader of this review is anything like me, then that person read the name INSISION in Daniel Ekeroth’s much acclaimed book, “Swedish Death Metal” (Ekeroth was the band’s long time bassist before stepping out in 2008 to focus on his career as a documentary film maker and author). As Ekeroth explains in his book, the climate for Metal in the mid 90s was unwelcoming, cold and dreary. Fewer and fewer bands, it seemed, were playing good Death Metal with conviction. However, exceptions to the norm existed: established bands like DISMEMBER stuck around, and younger bands such as REPUGNANT and INSISION made their first marks. This anthology collects all of INSISION’s demo material plus the EP released before their debut album, “Beneath The Folds Of Flesh”. I became a big fan of that album, but never got around to checking out the demos. Doing so would have proven difficult anyway – original demos are hard to come by. Thus, I never bore witness to the evil, noxious oozing, burning, mass that is the “Meant To Suffer” demo. To my hearing there’s something innately negative about the tones and sounds, as though they were conjured rather than mechanically reached by turning knobs; in a word, atmospheric. Even at this early stage in their career (1998), INSISION had an identity and, particularly when you consider they’re Swedish, an uncommon style: Swedish mid-ranges, but also a liberal American influence. HYPOCRISY comes to mind. The cover of CANNIBAL CORPSE’s immortal ‘Hammer Smashed Face’ squashes any dissent. There’s an American influence at work. On the second demo, the live tape, “Live Like A Worm”, the discordant harmonic squeals favored by American bands as varied from CANNIBAL CORPSE and INCANTATION. Keep in mind I’m not saying INSISION was the first Swedish band to do this. What I’m saying is that it’s rather atypical for a Swedish band. Not unprecedented, though. In a way, “Live Like A Worm” demonstrates more skill than “Meant To Suffer”. Were it not for the cheering crowd at the end of each song, I would easily forget that “Live Like A Worm” is a recorded live show. Because of that, INSISION exhibit finesse, dexterity, and intensity – all qualities a successful working, touring band must have. While arguably better sounding because of its recording conditions, the live tape evokes the same sense of nastiness that “Meant To Suffer” so strongly projected. And again, the fact its live gives an added thrill. This must be one hell of a band to see. Hopefully without the CANNIBAL CORPSE covers for they’re much better at performing their own material. Disc 1 concludes with the 1999 EP “The Dead Live On”. The original artwork wasn’t much to admire, but the music itself continues to destroy. It was the band’s best sounding production to date, though I think it likely a few bemoaned the inevitable loss of filth from the demos. On the other hand, what we have in its place is a demonic aura very similar to "Legion" era DEICIDE. Not much to complain about if indeed anyone was complaining. The filth I described above never quite returned, although INSISION did release two more demos, “Promo 2000” and “Revelation Of The Sadogod”, both on Disc 2. The 2000 promo demo is a suffocating cloud of cemetery dust, quite haunting and memorable. Another likely point of objection for the strict of taste was the increased technicality, itself a new source of atmosphere, but another necessary departure from the uniqueness of yesteryear. “Revelation Of The Sadogod” obliterates the 2000 promo and stands up to the first two as a demonstration of raw ability and vision. The last INSISION demo blasts ferociously from the speakers. I think I discern a slight NILE influence, but the melody to which I’m referring (in the song ‘Before My Altar’) is anyone’s guess. It does sound like NILE, though. A decent cover of ‘Zombie Ritual’, the old DEATH classic, closes “Revelation Of The Sadogod”. A fine end to a fine demo, but the true end of the anthology is the 2012 version of ‘Exaggerated Torment’, originally featured on 1998’s “Live Like A Worm”. I prefer the original but this re-recording stands its ground. I highly encourage everyone to check INSISION out if you have not done so already. This double-disc collection of demos and EP is a great way to introduce yourself. For more info check out www.facebook.com/pages/insision/167990061947, www.sevared.com