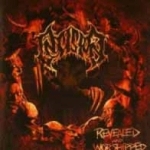 Swedish Death Metal still rules!!! As long as it’s brutal and doesn’t sound like IN FLAMES of course. INSISION from Stockholm definitely belongs to the brutal kind of Swedish bands and the major league of Swedish Death Metal. I was quite surprised to hear that drummer, spokesman and founding member Thomas Daun left the band before the recording of "Revealed And Worshipped". And so I was wondering if this would have caused any changes concerning the INSISION style. After listening to "Revealed And Worshipped" many, many times I’m glad to hear that this is still the blasphemous and brutal band I know from the demos, the MCD and the debut album. Hell yeah, I really like "Revealed And Worshipped", it’s a massive piece of unholy Death Metal. It’s very intense and brutal and has an obscure and unholy feeling and the vocals are dark, deep and demonic. That’s exactly what I would call Death Metal the way it was meant to be. "Revealed And Worshipped" is well produced and has a very massive sound. INSISION has a very high "kick ass factor", but it’s not just monotonous hyper brutal Death Metal. Those Swedish maniacs created some very good songs with remarkable guitar work and many cool riffs. My faves are ‘The Foul Smell Of Humans’ which is a hell of a fucking great song and ‘In The Gallows’ which begins with a great Morbid Angel inspired part. That’s damned cool. I wouldn’t say that "Revealed And Worshipped" is better than the debut album, in my humble opinion both albums are on the same high level, so I highly recommend "Revealed And Worshipped" to all the Death Metal hordes out there. It’s a massive album. Buy!!!