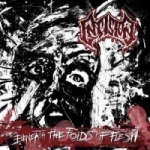 This is it!! This is the ultimate Death Metal album in quite a while that everyone out there has to compete with from now on!!! These guys are fuckin’ amazing!! It’s already been quite a while since I’ve been awaiting a debut full length from a band with a similar anticipation, but unlike many other stupid bands out there, INSISION did everything the right way. They released a pretty good MCD (“The Dead Live On”) on Heathendoom Music back in 1999, recorded two (already way more brutal) promo tapes afterwards and through them they made sure to get their good reputation out into the underground – just like everyone else used to do in the good old days. INSISION are playing the most brutal form of Death Metal and therefore could easily be mistaken for a band from the US. But this five piece hails from Sweden and blows away all of their countrymen pretty easily. Extremely deep grunted guttural vocals, tons of brutal killer riffs, intense drumming, technical yet easily accessible songwriting and an overall powerful sound will either leave you speechless throughout the whole playing time or force you to constantly bang your head! You still think old GRAVE sounded brutal? Ha, this album will prove you wrong within seconds! The nine featured tracks are basically a collection of songs that already appeared on the aforementioned two promo demos (‘World Impaled’, ‘Temple Of Flesh’ and ‘My Fever’ being the only real “new” tunes on here), which was a wise decision, cause they are simply to good to be left behind on tape exclusively. And the main / leading riff in ‘Before My Altar’ will probably send shivers down my spine whenever I play this track in the future. Well, to cut the crap – if you miss out on this godly massacre, you are lost and not worthy to call yourself a Death Metal maniac. Watch out for an interview with the guys to be published here as well!