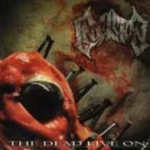 I was a little confused at first when I read the description that INSISION drummer Thomas was giving me in the letter he’d included in their promo package: "INCISION play technical and brutal US Death Metal in the vein of SUFFOCATION and IMMOLATION…" Hmm… while listening to their impressive 1999 mini CD "The Dead Live On" I immediately recognized their obvious brutality and also several influences from the American scene. Yeah, and maybe some hints of SUFFOCATION as well, but IMMOLATION? No, definitely not! I found out how wrong I was after I got to hear their more current 4 song promo, which was recorded in May 2000. The line-up changes that took place ever since the recordings of "The Dead Live On" changed the band’s overall sound into something even more brutal and their songwriting has become a lot darker as well. Already the change in the vocal department (former AZATOTH frontman Carl Birath replaced original singer Johan Thornberg) justify comparisons to IMMOLATION nowadays. The band has changed from a fivepiece act into a fourpiece now, leaving all guitar duties to Roger Johansson. And in former DELLAMORTE four stringer Daniel Ekeroth they also found a dedicated new man for the rhythm section, who was already heavily involved in the songwriting of the material on the promo tape. Both releases are highly recommended to fans of uncompromising, brutal Death Metal and if they should manage to write more stuff of this impressive quality I bet that we will quickly hear of these guys again in the near future! The mini CD sells for $10 / 15,-DM, the promo tape for $4 / 8,-DM and shirts are available for $10 / 20,-DM from the following address: INSISION, c/o Thomas Daun, Birger Jarlsg. 75, 11356 Stockholm, Sweden, email: INSISION@telia.com