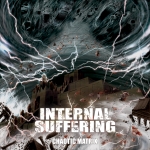 “Chaotic Matrix” is the second full length album recorded by the Colombian brutal Death Metal band INTERNAL SUFFERING. A modern classic of intense and ultra brutal Death Metal, originally released in 2001 and recently reissued in a limited and remastered edition by the Russian label Satanath Records. “Chaotic Matrix” follows the wake of INTERNAL SUFFERING’s debut album “Supreme Knowledge Domain” in terms of chaos and brutality, although the production here is a bit better; yes, but not so much better to lose the rawness and savagery of their uncompromising brutal sound. “Chaotic Matrix” isn’t an over produced, digitized, quantized, polished and adulterared album; no, it’s an album played from the first second to the last one and it’s extraordinarily well played and well written. This is a real lesson in musical violence: extreme and sick music for extreme and sick people. We have ultra fast, technical and downtuned guitars, enriched by many memorable and complex riffs, a punchy and fatty bass tone, along with an unstoppable and very dynamic drumming. The snare sound is amazing, due to the choice of playing it without wires (a typical characteristic of many Colombian and Indonesian brutal Death Metal bands). The drummer’s performance is excellent: very fast and accurate blast beats, bomb blasts, an omnipresent double bass, precise cymbal accents, rollings, everything you would expect from a brutal Death Metal album. Same goes for the vocals: ultra guttural and ferocious, filled with disturbing screamings and pig squeals too. The voices are pretty reminiscent of Sylvain Houde’s psychotic and brutal style during his ‘Northern Hyperblast’ years as lead singer of KATAKLYSM. The early works of the Canadian band – and MORBID ANGEL too – have been for sure a great influence on INTERNAL SUFFERING also for what concerns the concept and the lyrical themes: mysticism, Assyro-Babylonian mythology, demonology and Lovecraftian mythos. Even the song titles and lyrics are written in the same way of old KATAKLYSM, intricated and divided into chapters and subchapters. Well, if you’re into technical and brutal Death Metal, “Chaotic Matrix” is a masterpiece, without any doubt. This particular edition contains also some extra material: two live songs, one track from the split with INDUCING TERROR and one from the “Unmercyful Extermination” EP. For more info: www.facebook.com/internalsuffering, www.satanath.com 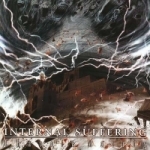 If you read Schenk’s review on the band’s debut album “Supreme Knowledge Domain”, you will already be aware of the musical extremes delivered by these Colombian sickos. And even though I never heard last year’s “Unmercyful Extermination” MCD, this four piece obviously hasn’t changed a bit! Apart from the fact that the production on this new full length is a lot better, they still stick to the ultra brutal, hyper fast grinding DEVOURMENT, DISGORGE (US) and CRYPTOPSY influenced Death Metal. Musically highly impressive, with totally devastating riffing and a tight, yet very intense rhythm section this album could have easily saved my day… if there wouldn’t be the totally stupid “vocals” of lead singer Fabio. This guy obviously doesn’t know what REAL brutality is all about as his performance exclusively consists of monotonous, completely distorted nonsense. Even the term “frog noise” would be a compliment in his case. Can’t stand this uninspired, noisy effect crap any longer and it really pisses me off to see more and more stuff like this popping up. This certainly ain’t no Death Metal at all – it might fit a bunch of wannabe stupid Hardcore losers, but not bands that downtune their instruments in order to deliver sick musical brutality. I mean, c’mon – if you’re not even able to deliver something brutal with your natural voice, FUCK OFF and leave this scene as bullshit like this is destined to kill a great musical style sooner or later! Too bad for the rest of the guys who seem to be very skilled…