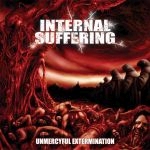 Incidentally INTERNAL SUFFERING are for sure a candidate for the most boring Death Metal band logo of all times. Their latest full-length is already four years old, but unfortunately this is not a new one. Although I missed “Cyclonic Void Of Power” in 2016, in retrospective that album is one hell of of a technical brutal Death Metal album. Now Satanath Records in co-operation with Rotten Roll Records are re-releasing the EP “Unmercyful Extermination” with a remastered sound. In the first place spawned 2001 by Macabre Mementos Records it already showed the skills of the band. Of course not at the heights of the later works, the ultra deep guttural grunting vocals are a bit too one-dimensional for my taste. The drum sound comes along a bit hollow and plastic and tempo-wise it is fast-forward all the time. But dammit, even after nearly 20 years the title keeps its promise. So thumbs up to this point. But re-releases are always a tricky affair. Because during the last 20 years the EP has been reissued two times on CD. So honestly I do not know if there is really a need for another version. Selling points are four songs originally released on a split album release with INDUCING TERROR from 2005 and just two tracks from the DVD recorded during the Brutal Domination tour in 2004. Having in mind the featured live set by INTERNAL SUFFERING on this DVD has a running time of 30 minutes the two songs (six minutes) on this release only represent one fifth of the whole live recording. But enough of this petty nit-picking. Brutal Death Metal fans in general and BRODEQUIN fans in particular not common with the band should unquestionably take a listen. And followers of the quintet, which in the meantime moved from Columbia with a stopover in New York to Spain, who are missing this EP in their collection are going to buy this output anyway. For more information visit www.facebook.com/internalsuffering, www.satanath.com or www.rottenrollrex.com