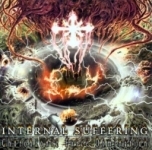 KILLER! I really anticipated the new album by this brutal horde from Colombia. After the strong predecessor “Chaotic Matrix” I expected nothing else than a killer. And hell yes! It is a killer! This four piece outfit is able to convince me now the first time for 100%. The excessive touring after their last album had for sure a big impact on their song writing abilities as INTERNAL SUFFERING sound much tighter and more mature than before. It’s a pleasure to listen to those 9 total blasting and lethal tracks. The drumming is incredible fast and tight, it takes no prisoners like a tornado leaving a path of destruction. The riffs are precisely and razor sharp like a scalpel, executed on a high technical level. Though all tracks are played on ultrasonic speed the songs don’t get boring because these Death Metal warriors slow down at the right moment. The result are some great memorable morbid midtempo riffs, having this dark old school Death Metal feeling. After you have recovered a while the band attacks again with merciless speed. It’s hard to highlight one track as all nine are furious and on the same technical level but to have an example just take the title track ‘Choronzonic Force Domination’. It incorporates everything I mentioned before. A big plus is the production done by HATE ETERNAL’s mastermind Erik Rutan. “Chaotic Matrix” was a little bit too clinical and ‘dry’ for my taste but fortunately with this brilliant production the songs of INTERNAL SUFFERING get their right performance. Very powerful, aggressive yet technical guitars and thunderous drum walls – a ballanced overall sound (no instruments are ‘too’ dominant). There’s an utter dark atmosphere throughout the album (especially in the slower parts)… as Death Metal was meant to be. Also the vocal department improved in my opinion and the deep growls fit perfectly to the massacre. To sum it up: “Choronzonic Force Domination” is a killer album which should please everyone into brutal Death Metal and maybe also old school maniacs who like their stuff fast paced. These guys are much better than a lot of (overrated) US bands and prove that they are the leading force of the South American ultra brutal squadrons. By the way… the cover art which was done by Studio Sho (Mortician, Deeds Of Flesh) turned out excellent and top this masterpiece off. The only negative aspect: after a bit more than 33 minutes the massacre is over… but I guess your neck will be happy about this as more banging could be dangerous. Death Metal forever! Contact either the label at www.displeasedrecords.com or the band www.internalsuffering.com, email: intersuffering@hotmail.com. 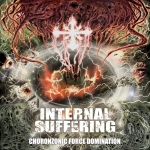 “Choronzonic Force Domination” is the third full length album recorded by the Colombian brutal Death Metal band INTERNAL SUFFERING, originally released in 2004 and recently reissued by the Russian label Satanath Records. This new and remastered version contains some extra tracks: four rough mixes and demo takes, to be more precise. In this album INTERNAL SUFFERING keep to the traditional path of pushing their sound to the limits of extreme brutality, a style started back in 1996. Here we have the same line-up of their ultra raw and brutal debut album “Supreme Knowledge Domain”, since “Choronzonic Force Domination” sees the coming back of the original drummer Fabio Dr. Grinder Ramírez. As on their first album the snare is recorded with wires and it changes the overall sound a bit if compared to their second effort “Chaotic Matrix”, where the snare was played without wires and therefore it sounds fattier and more obscure. The songwriting is a complex alternation of furious blast beats and suffocating slammy parts, although these latter slow tempos are not as much present as on “Supreme Knowledge Domain”. The drumming is a precise non-stop bombardment of blast beats and bomb blasts with an omnipresent double bass and many cymbal accents. The bass tone is killer (punchy and very audible), whereas the guitars are ultra technical, downtuned, fast, frantic and intricated. The vocals, as on their previous albums, are a mixture of ultra guttural growlings, screamings and squeals, all heavily influenced by early KATAKLYSM, DEVOURMENT, DISGORGE (USA) etc. KATAKLYSM are the main influence even for the lyrical themes, along with MORBID ANGEL; this is the recipe: HP Lovecraft, The Ancient Ones and a bit of Aleister Crowley. In conclusion this is a very intense and powerful example of ultra brutal, technical and chaotic Death Metal. At least 80% of “Choronzonic Force Domination” is characterised by a never ending blast beat assault. I would compare it to other extreme modern classic titles, such as “Festival Of Death” by BRODEQUIN and “Proclaiming Vengeance” by MENTAL HORROR. So, if your ears can’t stand this kind of ultra sick stuff, stay away from it; otherwise you’ll discover a little gem of pure and uncompromising brutality. www.facebook.com/internalsuffering, www.satanath.com