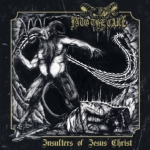 INTO THE CAVE
Insulters Of Jesus Christ
(Iron, Blood And Death Corporation)
36:07min

First of all, and shame on me, only the album title sounded familiar to me first, but I couldn’t remember to what exactly. Some googling before, what a surprise (yes I know Google is evil – but that’s the theme here, isn’t it??), a 1989 SARCOFAGO bootleg also got the same name. And when you listen to this new INTO THE CAVE release (their second after “Sex And Lust” in 2014), you can consider or imagine that there is much more than a simple fortuity. A kind of tribute? Maybe a bit, but it would be too easy to reduce it to that simple note. Here we can certainly hear some DESTRUCTION influences too (riffing side). This album sounds like it comes from the golden 90s, but of course with a better and raw production and a most of the time aggressive guttural throat. The opening track ‘Insulters Of Jesus Christ’ begins with a “SLAYERian” introduction, which immediately captivates the auditor and then cut him into pieces with some fast riffing overhung by chopped vocals which will show the album’s direction: fast, devilish and black as fuck! ‘Pure Filth From The Grave’ will first surprise you with a mid-tempo pace which let you breathe slightly but then a savage knightage will guide you to the grave. ‘The Beyond’ is aptly named. You are lost on the other side and probably won’t be able to return. ‘Scarlet Queen’ is a pure Black / Death song. Fast and aggressive with redundant riffs, until a monster break will hit you and leave you on your knees. ‘To The Devil A Daughter’… I could listen to the main riff minutes long and play it again and again. An ode to the headbanging with the return of those possessed chopped vocals. Both ‘The Serpent Ring Of Seth’ and ‘Vomiting Blasphemies’ suggest the same trip… no breathing possible, just gasping for air. ‘Dethronation Of Christ’… the hour of the last judgment has come, and INTO THE CAVE will give you what you deserve! The shortcut is maybe quickly done but “Insulters Of Jesus Christ” could nearly be considered (all proportion kept of course – time makes history) as the modern reincarnation of the legendary SEPULTURA release “Bestial devastation”. To get more information, just have a look here: www.facebook.com/intothecave666, www.facebook.com/ibdc666

Related reviews / interviews:
• INTO THE CAVE - The Ritual Of The Blind Dead (Rick Peart)
Back Report errors Print