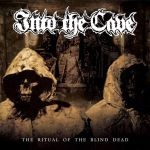 INTO THE CAVE
The Ritual Of The Blind Dead
(Iron, Blood And Death Corporation)
37:54min

Death Metal, Black Metal and Thrash Metal from Brazil are always a guarantee of sonic violence. I have to admit that I had never heard of INTO THE CAVE from Rio de Janeiro but I wish I had. Here we have 14 songs for almost 38 minutes of pure South American Death / Black / Thrash Metal without compromises and in the vein of legendary bands such as SARCÓFAGO, SEXTRASH, ANAL VOMIT, GOAT SEMEN, HOLOCAUSTO, VULCANO, EXPULSER, MUTILATOR, HEADHUNTER DC, early KRISIUN etc. In short, INTO THE CAVE is a violent, brutal and primitive band that wouldn’t have been out of place in the classic Cogumelo Records catalogue. “The Ritual Of The Blind Dead” is an album divided in two parts: the first seven tracks are a studio session of five songs with an intro and an outro, whereas the second one consists of five live songs recorded at the Teatro Odisséia in Rio de Janeiro. The album was released in June 2020 in Brazil by Kingdom Of Darkness Productions and in Mexico by Iron, Blood And Death Corporation. The production is very solid, pretty raw and reminiscent of the golden era of SARCÓFAGO. The songwriting is killer too with tons of brutal blastbeats, evil riffs and demonic growlings. An extra point goes to the horror / gore inspired concept. The studio session, recorded in late 2019, is a concept EP based on the 70s “Blind Dead” horror / gore saga written and directed by Amando De Ossorio. Nothing original, because the Spanish Death / Grind band MACHETAZO had already released a “Blind Dead” concept album in 2005. In any case, I appreciated this choice in terms of lyrics, titles and artwork, since I’m a hardcore horror movie fan. The live songs don’t add anything essential to the album, but the quality is pretty good. In conclusion, if you’re into South American extreme metal brutality and old school horror movies, INTO THE CAVE are an interesting addition to your collection: recommended! www.facebook.com/intothecave666, www.facebook.com/ibdc666