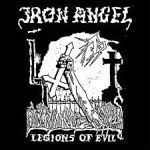 High Roller Records put together a nice package of the first two demo tapes of this German speed force called IRON ANGEL in September of last year. I’m personally not too familiar with the whole IRON ANGEL catalogue and must also admit that I’m not even that much of a fan of their classic “Hellish Crossfire” record. But this demo compilation definitely rules big time. Most of the material is basically “Hellish Crossfire” stuff, with one track that was later found on “Winds Of War” and two never re-recorded songs. Anyway, compared to the full length versions, these demos, as it is quite often the case, have such a great spirit and vibe to them. It’s plain Speed Metal to the bone with absolutely no fucks given. The drums are pounding and crushing, the guitars are ripping like chainsaws and the vocals are sheer testosterone soaked eruptions. Side 1 features the “Legions Of Evil” material which was from September 1984 (!!!) while Side 2 offers the “Power Metal Attack” from January of that same year. So it’s quite nice to have this material from a what seems to be ultimately productive era of this band combined on one output. Especially the two never used again tracks ‘Devil’s Gate’ and ‘Maniac Of The Night’ are absolute highlights in my book. So in case you are anyways into IRON ANGEL, go get yourself a copy of this nice release. If you somehow, like me, are not that much of a fan of their full length outputs give those demos a try, you will love ‘em! Check out www.facebook.com/ironangel.hh and www.hrrecords.de for more information.