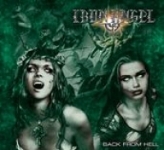 On that neverending list of reformations, here’s the IRON ANGEL one like it had been announced by drummer Mike in a not so distant past. Just by looking at the line up that composes IRON ANGEL 2007 you can be somewhat sceptical about what the band can deliver these days as only Mike Matthes (who also plays the guitar and bass parts) and vocalist Dirk Schröder are part of the reformation. Not a strong point to start with. Now let’s cover the musical aspect and see where IRON ANGEL sits in between the legendary "Hellish Crossfire" album and the so and so "Winds Of War" release with this five song comeback demo. Starting with a rather long and unnecessary intro, the band then delivers ‘Puppet On A String’, which in the end is definitively the only song that shows a certain potential out of the entire recording by far, a fast and thrashing tune that is enjoyable to a certain extent, but still can’t compete with any of the original IRON ANGEL material. I just wished they wouldn’t have used those backing / shouting vocals on the chorus as it sounds ridiculous, but as a whole the song sounds okay. Then comes ‘Back From Hell’, now that’s a different story as the band have opted for staccato / basic riffing, semi Hardcore vocals and all those elements that make Nu Metal so disgusting… for 2007 fans it certainly sounds right but for old school Metallers this is utter crap! Plain and simple. Next is ‘Sanatorium’ and unfortunately it sounds more or less like ‘Back From Hell’ part 2: garbage! The torture goes on with ‘Unbreakable’ which is structured with more downtuned sounds, staccato riffing… there’s simply nothing that can be saved. I wish I could say that this recording rips, kills, shreds etc… but I can’t help and conclude by saying that they have totally failed to continue the IRON ANGEL legacy, but ruining it instead – joining the league with EXODUS, ONSLAUGHT, KREATOR (?? – Frank) etc of today, having preferred to adopt the musical approach of 2007 rather than staying close to their original roots / sound, or at least having released this under another bandname. www.iron-angel.de