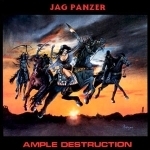 This is the second part of the remastered re-releases of the classic 1980s JAG PANZER recordings. "Ample Destruction" marks both the bands first full length and the final album with vocal god Harry ‘The Tyrant’ Conklin, before he left the band for nearly a whole decade to join SATAN’S HOST, RIOT and later TITAN FORCE. Always said to be a milestone of US Metal history, this album was hard to find for years. It even took me until the end of the 1990s to find a proof for all the rumors. The original Azra / Iron Works editions, as rare picture discs or even more rare black vinyl, never really showed up here in Germany, and when they were for sale, the sellers asked prices beyond any imagination. The re-releases on Metalcore, respectively Metal Blade from the early 1990s were out of print sooner than you could look for them, and so an official re-release was more than due. And, as you might expect, High Roller did a great job. The music on this album is of course without any doubt absolutely brilliant. The original four piece JAG PANZER were on their untitled EP extended to a five piece, thanks to the fact that the young and up to then unknown guitar hero Joey Tafolla joined the band and ennobled the already great compositions with his guitar arts. The album kicks off with ‘Licensed To Kill’, a faster song on the edge of Speed Metal, that lives by The Tyrant’s great and very varying vocals from deeper tones to terror shrieks in the tradition of SAVATAGE’s Jon Oliva. ‘Warfare’ comes along a little more moderate in speed and lives off its great guitar work. But it’s all just a hint on the first highlight: ‘Symphony Of Terror’ is a milestone in classic Power Metal. The outstanding guitars and the thrilling chorus are unmatched. The Tyrant never did a better vocal performance and the guitar duo Mark Briody / Joey Tafolla shines damn bright. It’s no wonder that ‘Harder Than Steel’ can’t match with this one, even though this up tempo song with it’s MAIDENesque twin guitar harmonies in the middle part is far from bad. Strange breaks, a pretty high tempo and a strange shout-along-chorus characterize ‘Generally Hostile’, the only song here which is not mine. But the epic ‘The Watching’ recompenses for this little inconvenience. The guitar and the melodies they deliver are damn brilliant. After an ‘Interlude’ with keyboards and acoustic guitars starts the ‘Reign Of The Tyrants’. In this break laden mid-tempo classic The Tyrant shows all his qualities and leaves Joey Tafolla enough space for his best guitar solo on the album. ‘Cardiac Arrest’ gives the listener some time to relax, even though it’s a fast one with a guitar hero solo. But with the epic and progressive ‘The Crucifix’, a song split into five parts, JAG PANZER show all they can. It evolves from a beginning as a dark ballad to a sinister epic with haunting twin guitars and a galloping speed that reminds of MERCYFUL FATE close to the end. John Tetleys bass playing even reminds of Timi Hansen here. ‘The Crucifix’ definitely is a masterpiece, one of those songs you must have listened to if you like classic Metal. The extra track ‘Black Sunday’ was already used as a bonus track on prior re-releases of "Ample Destruction" and seemed to be recorded during the album sessions, but then left out of the album. And this happened with reason, since it doesn’t meet the high quality of the other songs, even though it is far from being a stinker. In fact, most modern Power Metal bands would be proud to write a song like this. Without any doubt, "Ample Destruction" is a masterpiece of early US Metal and even though I like their comeback albums, especially "The Age Of Mastery", nearly as much, I can only state that anybody, who digs classic Metal should know this album. The Tyrant sings like a young god here, the musicianship is awesome and the songs are so fantastic, that they should serve as examples for students in school. Asides from the CD, "Ample Destruction" is also available as a vinyl edition done with passion- imagine High Roller without releasing vinyl… impossible! The LP comes, in contrast to the original, in a gatefold sleeve and includes a 24" x 24" poster. Check www.jagpanzer.com or www.facebook.com/pages/jag-panzer/84974341925 for info about JAG PANZER or www.hrrecords.de for info on the remasters.