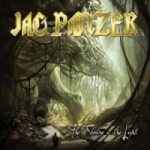 Now a highly anticipated one, because JAG PANZER is simply not ‘another band on the list’, they are the band that has written one of the finest Power Metal album EVER known as "Ample Destruction" and delivered a bunch of other fine albums, but those never really recaptured the magnificence and rage "Ample Destruction" possess. Anyway after a six years break, the legendary bunch is back with a new label and most of all, good old Christian Lasegue on lead guitar. The right move if you ask me considering how disappointing the last two albums were. Right from the first time I’ve heard this album, I’ve found it to be good as a whole, but it took numerous listens to fully appreciate it. ‘Condemned To Fight’ opens the hostilies in a furious way with in your face double bass, top notch vocal work and a great song structure. ‘The Setting Of The Sun’ is along the lines of what JAG PANZER has delivered during the last decade, calm, melodic and Harry’s awesome melodies on the chorus mixed with violin lines makes of this a very cool track. ‘Bring On The End’ alternates between a super heavy edge and a very melodic one, the mix working perfectly well together, the shredding lead being maybe too much here as it doesn’t really go anywhere, but overall a great song. ‘Call To Arms’ is a bit along the same lines, great chorus in the typical JAG PANZER way. ‘Cycles’ turns out to be nothing but a filler, typical Heavy Metal with nothing special attached to it. ‘Overlord’ is another medium tempo number featuring a similar feel to ‘Call To Arms’ or ‘Bring On The End’, heavy verses, medium paced tempo and angelic choruses. There’s only one Harry Conklin! The guy fuckin’ smokes but without Mark Briody and Christian Lasegue inspired songwriting / playing it wouldn’t work. All those guys complement each other perfectly. ‘Let It Out’ is the second Power Metal scorcher and really reminds of early PANZER when aggression, controlled speed and sheer rage were their priorities, still it doesn’t compete with ‘Licensed To Kill’ or ‘Warfare’ – just good. With ‘Union’ we’re back with the actual JAG PANZER, and this one could become the band’s new hymn but it’s somewhat too much predictable for my tastes. ‘Burn’ starts with a piano intro, then comes a shredding attack before going into a sort of PRIEST like number ("Painkiller" era), possibly my fave song out of the ten as this song possesses most of the elements one can expect from JAG PANZER – killer! ‘The Book Of Kells’ ends this new album in a very melodic way like classic PANZER albums ends, good but I wouldn’t trade ‘The Crucifix’ for it. All in all a very strong album but I for one would like to hear more up-tempo songs to make it more diverse like they used to do a long time ago. www.jagpanzer.com, www.myspace.com/jagpanzer