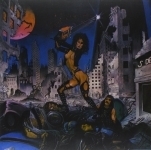 Let’s go back in time a little bit… In the mid of the 1980s, when I was a teenager heavily into Metal, there was a band, whose name wandered like a ghost through the pages of the magazines. This name was JAG PANZER, who must have performed some real prodigies. The "Tyrants" EP and especially the first and up to then only album "Ample Destruction" were said to be real masterpieces of US Metal. In fact, it was hard to find out if those rumors were true. You weren’t really able to buy their records in Germany, since they were put out by the obscure and meanwhile infamous Azra / Iron Works label, who had such a bad distribution, that their records practically never reached our side of the great ocean. Later those records were re-released several times, and not all those re-releases were official, or even well done. I remember a CD version of "Tyrants" on Mausoleum that was done in a very loveless way. But now this has come to an end. The always very dedicated High Roller Records (let’s all praise this gem hunter!) has done a series of official remastered JAG PANZER albums with all their recordings from the 1980s. Here we have the chronologically first one of the series, the famous debut mini-album from 1983. The original 12" was untitled, but through the years it became the "Tyrants" EP, a name that’s meanwhile accepted by the band as well. Since High Roller don’t do things by halves, they spiced up the primary EP with no less than eight bonus tracks, making it a full album. Of course the four songs of the original "Tyrants" are classics of the first years of US Metal, sometimes a little naïve, sometimes a little outdated for younger ears, but hey, these recordings have been done 30 years ago! In times when METALLICA were new and thrilling, and not a housewife’s favorite. The opening track ‘Battle Zones’ is pure speedy US Metal, as classic as it gets, with great vocals by Harry ‘The Tyrant’ Conklin, one of the best Metal singers ever. The following ‘Death Row’ walks the same path. By the way: this song is probably the most misused song in Metal history, since Azra released it at least four times as one-sided shaped picture discs in different versions. ‘Metal Melts The Ice’ shows the slower side of JAG PANZER, that was worked out more on the following full length album. The final song of the original EP, ‘Iron Shadows’ also already hinted on following feats, as far as melody lines of guitar and vocals are concerned. Very fine stuff for a debut release in times of an awakening new Metal scene with great musicianship of the rhythm team John Tetley and Rick Hilyard and fine guitars by Mark Briody. As bonus we have demo recordings like ‘Tower Of Darkness’, that was already (mis-)used as the bonus track of the Mausoleum CD in the early 1990s, ‘ Under The Knife’ or ‘The Oracle’, which naturally lack a little bit of sound, but have a dimension of history. As far as the music is concerned, these three do fit perfectly to the material of "Tyrants". In the flow of the bonus tracks we find an early demo version of ‘The Crucifix’ that later appeared on JAG PANZER’s first full length "Ample Destruction" in an overworked and improved version and thus happened to become an all time US Metal classic deluxe. But this early version also has its special charm. The demo version of ‘Battle Zones’ is somehow needless, since the original version is featured here as well, and in a better version, too. But not every bonus track here is pure historical gold. ‘Rock & Roll Suicide’ and ‘On The Rocks’ even are classic cases of vicarious embarrassment. These songs keep what their names promise: embarrassing cheesy stuff that lacks of everything JAG PANZER stands for. This is just lame Hard Rock with painful lyrics. Even the vocal delivery of The Tyrant is pretty weak in comparison to the other songs here. The closing, just 15 seconds long a-capella-song ‘Sit On My Face’ is a nice joke to close up the album. If you wink at the two cheesy Hard Rock disasters, this album is a nice lesson in Metal history for all those who dig "Ample Destruction", and the tracks from the original EP alone are worth to listen to "Tyrants". The vinyl version is definitely fine, by the way, since it comes in a gatefold sleeve with an extra poster. Check www.jagpanzer.com or www.facebook.com/pages/jag-panzer/84974341925. Or go to the label site www.hrrecords.de