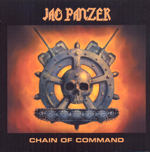 The long and lost "Chain Of Command" album, that was recorded back in 1987 and officially released by Century Media in 2004 in a limited run, has now again seen the light of day on behalf of the German resurrector of dusty Metal gems High Roller Records. After a quite good start JAG PANZER saw vocalist Harry "The Tyrant" Conklin leave the band after the ’86 demo "Shadow Thief", together with drummer Carlson and guitarist Tafolla, though went on a recorded this album with vocalist Bob Parduba, which really didn’t have the same sheer power and conviction in his vocal performance as The Tyrant, quite crucial to a release as this, as the "Shadow Thief" demo was the base for this recording and "Chain Of Command" do also host a couple of tracks from the demo. In, together with Parduba, we saw a new drummer and guitarist for this recording, two who lasted the career of the band, drummer Rikard Stjernquist and guitarist Christian Lasegue, the latter, which by saying caused the band to call it quits, when he left JAG PANZER 2011, even though I’ve recently seen that the geezers are going to team up to play some live gigs! Musically JAG PANZER has almost never let anyone down, masters of Heavy Metal infused Power Metal and power ballads gone wild, though this album is kind of dragging itself through the 11 originally tracks. There are some good guitars, the rhythm section is decent, but not as good as the one before, and not as good as the, then current, would become. And the vocals are somewhat thin compared to The Tyrant’s, and well, who puts not just one, but two instrumentals in the end of an album to finish it? And the fact that the record wasn’t released back when it was made. It is good fun to hear this document of JAG PANZER and where they were taking it, in an more soft and epic way, before they went into a hiatus, not long after the recording of this very album, before getting back into the game in 1993. I guess this is my least favorite JAG PANZER album, but it still has its moments. Though the addition of the bonustrack ‘When The Walls Come Down’, a unreleased demo track, doesn’t do much for me. The other bonus track, a live version of ‘Battle Zones’ from the "Tyrants" EP kick some nice Heavy Metal ass! Some of the good tracks on this album is found in better versions on later albums, but again, quite nice to hear how they where at first. www.jagpanzer.com, www.facebook.com/pages/jag-panzer/84974341925, www.hrrecords.de