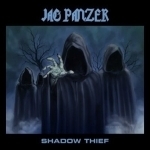 "Shadow Thief" was JAG PANZER’s third demo, after the debut full length "Ample Destruction" which was released on Azra Records back in 1984. Two years later this demo saw the light of day and laid the base for the band’s second album "Chain Of Command", which was recorded in 1987, but remained officially unreleased, until Century Media released their version of it in 2004, a version where most of the tracks during time had been re-recorded and then remastered. Though back to this re-release of the demo by the German label Highroller Records, which has quite a lot of re-releases on their back both on CD and vinyl. Quite nice as they’ve been digging up some dusty, hard to get releases here and there. These exact recordings have been remastered, and do sound quite nice. A lucid and clear sound that doesn’t lose the old school touch by excessive tuning or outbalancing of the volumes. It sounds like the 80s, without being dusty, very dynamic and powerful (this particular release definitely features the best sounding versions available of the entire material! – Frank). It is hard to find Heavy Metal and Power Metal more classic than this, JAG PANZER has always been following a path between the two styles, with quite a good deal of power ballads like, on this release ‘Out Of Sight, Out Of Mind’ and ‘Take This Pain Away’. Such can be a bit too sugarcoated and sweet for my personal taste, though I can’t deny that the band does a good job at such songs, even though my favorites are among the Heavy Metal bangers. A track like the straight forward and epic title track is much more up my alley, and tracks like that shows Harry "The Tyrant" Conklin from the perfect side, showcasing his range of vocals, from soft and smooth to high and piercing. He is one of my all time favorite vocalists, within this genre. And the guitar attack from Briody and Tafolla is inspiring and intense, backed up by the high energetic rhythm section of bassist Tetley, who always have been delivering some very enjoyable play, and drummer Carlson is a pleasure to follow. Highly intense and tight, always spot on. Again, a track like the JUDAS PRIEST inspired ‘Viper’, just makes me headbang all the way till dawn. And then we have the case of IRON BUTTERFLY’s ‘In A Gadda Da Vida’, which first was showcased on this demo and later on, on "Chain Of Command". A well-written and delivered track by the psychedelic rockers, which has a part in how Heavy Metal developed soundwise. JAG PANZER’s version does justice to the original and the Tyrant’s vocals do fit the dramatic atmosphere of the track’s progression. A release worth the time of any JAG PANZER fan, with a soft side, and if you think you know what Power Metal is and never have laid ears upon these American legends, get into the game and check them out. They knew how to craft and deliver a good and powerful tune and well, Heavy Metal fans, don’t let this one slip by! More info at: www.jagpanzer.com, www.facebook.com/pages/jag-panzer/84974341925, www.hrrecords.de