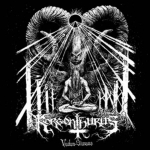 I wanted to check out KORGONTHURUS for the longest time now. After all, they were that band with that absolutely unreadable and borderline parody logo… fortunately, they went for a more readable and serious approach now, so I could go into the whole thing unbiased and impartial. For the uninitiated (like myself), KORGONTHURUS are ex – members of HORNA and TOTALSELFHATRED – two bands I have heard of, but never really bothered to listen to. The opening track here, ‘Kaaos’, sets the mood: chaotic as fuck, yet strangely soothing, with a mix between high pitched vocals, death growls, rabid breakdowns… damn, this really isn’t too shabby! Far from what I expected, but expectations are seldom a good thing. The blastbeats dominate all throughout the entire album, but "Vuohen Siunaus“ seems focused on a rabid and bestial atmosphere above all. You can feel the hatred creeping up on you; hatred for the current state of Black Metal, hatred for humanity in general, but it sounds misdirected. All throughout the whole album, melodic and slower mid-tempo to even doomy parts grant some time to relax before the next onslaught pummels the listener into defeat. It’s almost as if KORGONTHURUS can’t really decide who they would like to attack: the soothing and – for lack of a better term – "majestic“ interludes are there in between all the chaos, but I can’t help but wonder if they drank the priest’s vomit just like VENOM did. Not that VENOM ever were truly satanic at all, but KORGONTHURUS don’t seem to be either. It’s all just "extreme“, as in that unfortunate term "extreme Metal“, but hardly ever is it black. Black Metal has to be satanic, it has to be religious, esoteric, occult and – more than all these things combined – evil. This is comic strip evil at best: KORGONTHURUS have all the right ingredients, but don’t how to stir them up in Lord Lucifer’s cauldron. The main exception is the final track here, ‘L.U.X.’, spreading over more than 14 minutes, coming closest to an other- or outerworldly experience. So, at the end of the day, when night finally falls, it’s an OK album. In fact, it would even be a good album, considering what kind of bands creep out of Finland these days… the unspeakably horrible GOATMOON being on top of the list, followed right away by SATANIC WARMASTER. KORGONTHURUS sure as hell ain’t neither UNHOLY nor BEHERIT nor IMPALED NAZARENE, and they ain’t no CLANDESTINE BLAZE or BEHEXEN either. There are somewhere in between. For better or worse. More information at: www.facebook.com/pages/korgonthurus/433182950101072, www.woodcutrecords.com