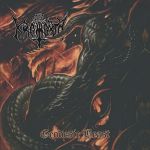 There is this famous scene called "The Bonnie Situation" in the movie "Pulp Fiction" where John Travolta and Samuel L. Jackson are being told by Harvey Keitel to do everything "fast, fast, fast". I am not sure if Harvey Keitel aka The Wolf was involved in the debut by KROMORTH from Brazil, but everything during the half an hour playing time is fast, fast, fast. No intro (just a one minute short sequence of atmospheric noises), no interludes, no acoustic or synthesizer parts, no spoken words or movie samples. From the very beginning to the end up-tempo Death Metal reigns supreme. Reminds me of BRODEQUIN or the early works of acts like KRISIUN or REBAELLIUM. With a one-dimensional album like this the most eminent question is – does it work? In my eyes, yes! Because the musicians are knowing to handle their instruments, the band was originally formed back in 1999 and although they only released one demo ("In The Name Of Kutulu") in the year 2000 the interaction is tight as hell. The sound has some old school vibes, but is absolutely up to date in categories like power and transparency, no mashed up hodgepodge. Very important: the sound is well-balanced, an equal share of every instrument plus the vocals. Song titles like ‘Catatonic Fury’ or ‘Fire Of Transmutation’ may lead to excessive salivation for fans of satanic Death Metal. The playing time maybe considered short by some people, but for a brutal album like this it fits perfectly. If you want to meet the "Geodesic Beast", visit www.facebook.com/kromorth or www.facebook.com/ibdc666