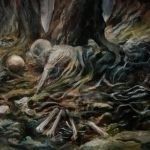 “Cadaver Circulation” is the third full length album from the Finnish Death Metal band KRYPTS, recently released by the American label Dark Descent Records. Six long songs for almost 37 minutes of sonic obscurity that follows perfectly the style of their previous releases. A very cryptic and dark form of Death Metal that has made these guys one of the most appreciated bands in the today’s underground. You know, KRYPTS are not the typical modern clone of Scandinavian or US Death Metal, but they belong to that group of bands that mix old school Death Metal with Doom, which is for sure a trendy mixture nowadays. Anyway, also in this style there are many differences, because the scene has offered so far tons of INCANTATION and AUTOPSY copycats (the majority unworthy of note), slow and catchy bands in the vein of COFFINS, HOODED MENACE, ANATOMIA etc, more melodic stuff à la very early PARADISE LOST and KATATONIA or those names that are able to incarnate the rotten touch of old school Death Metal and the obscure sound of Funeral Doom Metal. DISMA are for me the best example of this latter approach and KRYPTS are another good member of this circle. The recipe is solid and effective: some brutal accelerations here and there, depressive and funeral melodies, claustrophobic slowdowns, mid tempo double bass, suffocating growlings and a catacomb like production. “Cadaver Circulation” mixes the ferocity and morbidity of ancient European Death Metal (CONVULSE, FUNEBRE, ADRAMELECH, ABHORRENCE, PURTENANCE etc) with the gloomy sickness of some Funeral Doom acts such as THERGOTHON, DISEMBOWELMENT, EVOKEN etc. The result is good and the album works very well, although I would have preferred more fast parts, but “Cadaver Circulation” is more focused on atmosphere than brutality. Darkness: this what it’s all about. So, if you’re into minimalist Death Metal with a very heavy touch of Doom, this album is perfect for you. More info at: www.facebook.com/kryptsdeath, www.darkdescentrecords.com