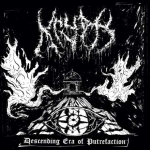 Hell yeah! This is a ‘must have’ and an absolutely awesome release. Why? Well, there are plenty of reasons… Finnish Death Metal rules, demo compilations are great, KRYPTS is an outstanding band, “Open The Crypt” is one of the best Death Metal demos I’ve heard in a very long time and I waited years and years for a proper re-release. I remember the first time I listened to “Open The Crypt” in 2009, I was totally blown away by the opening track ‘Day Of Reckoning’. That riff at the beginning is so utterly heavy and massive; I instantly fell in love with KRYPTS. Everything was just perfect and outstanding: all four compositions, the sound, the powerful and ultra heavy voice, the dark unholy atmosphere… just everything. I guess there is no demo, which was released during the last decade I’ve listening to more frequently than I did to “Open The Crypt”. Although KRYPTS is still a great and outstanding band, which never released anything weak, I have to say that “Open The Crypt” from 2009 is not just the first sign of life it is also the band’s magnum opus, at least in my humble opinion… This compilation also contains the self-titled 7” from 2011 and an unreleased rehearsal track from 2013. So there is absolutely no excuse for anyone to miss “Descending Era Of Putrefaction”. Get it now! More information you will find at: www.facebook.com/kryptsdeath, www.darkdescentrecords.com