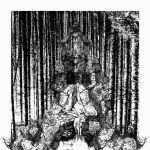 This split gathers LOATHFINDER, from Poland, and DRUJ, from the USA, the first with three tracks and the second with two, but all of them rather long. LOATHFINDER play a kind of Black / Death / Doom Metal, very heavy and ponderous. The production is great, offering a surrounding mood full of distorted downtuned stringwork and clear, heavy drumming. The lengthy songs are very mood-setting, very slow at times, and often quite cinematic; the second track, ‘XXIX’, consists of six minutes of an ominous ambiance, just string instruments and effects, making you imagine Lovecraftian horrors in some dark swamp. ‘The Ugliest Crown’ picks from there but a thunderous bass line introduces the drums and the dragging, broken-glass-gurgling vocals return in the finest tradition of the most brutal old Doom / Death bands, ending LOATHFINDER’s part with a slow, megalithic slab of macabre music. The vocalist cries in anguish surrounded by cavernous growls before the end. As to DRUJ, they play a very similar style of music sounding a bit less sophisticated and a bit more chaotic, with even more inhuman and reverberant vocals. The production is less majestic, the guitars more trebly, and it all sounds more like a band playing in a studio. In the middle of their first song, ‘Thee Insatiable Fever’, they show they can also play very fast, and dive into a total Death Metal massacre before returning to the doomier side. Finally, ‘Divulge’ also shows their versatility and musicality even in such extreme a style as this… the vocalist is clearly trying to sound like Cthulhu would, should the Great Old One ever join a band. If you are into really heavy and dark Death / Doom, this split by two fine bands will surely be worth hearing. Check it out at: www.facebook.com/loathfinder, www.facebook.com/druj-295196117579413, www.godzovwar.com