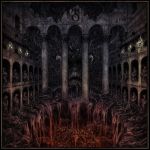 LOATHFINDER play a hammering style of Doom Metal infested with Black Metal technique and aesthetics. Coming out of Poland, and appearing into the underground cloaked in obscurity, the four-song “The Great Tired Ones” EP is the first execution of their craft. This style of Doom – where it becomes mixed with the principles of another genre – is ruled and influenced greatly by a particular set of parameters that actually have little to do with writing music at all. The tonal quality, production and atmosphere are huge pillars this style leans on. Right from the start, on the opening track ‘Genetic Gloom’, LOATHFINDER immediately remove the guess work as to what to expect with the rest of the release: rancid, crawling Death Metal delivered at glacial speeds, laced with the torturous atmospherics and bleak, desperate melodies of Black Metal. Riffs formed from tightly-packed intervals of notes, building up layer by layer with each accompanying instrument that supports the main thematic phrase, drive the songs into cyclical pulses that project a harrowing negativity and bleakness. ‘Genetic Doom’ and ‘Feast On My Entrails’ bring about the mental imagery of wastelands with their leering slabs of simple but wholly effective riffing, paired together with well-produced percussion and vocals that spew a real sensation of existential suffering. ‘Scents Of Regression’ opens with a heavily-distorted bass line which drags in the guitars to create an effective musical idea that balances groove with cacophony without coming off like a gimmick. The title track closes “The Great Tired Ones”, clocking in at nearly 10 minutes, which has the song unfolding much as a short story would. The production captures each instrument clearly and the mix is spaced out enough that the small, intricate details that went into “The Great Tired Ones” can be heard properly as opposed to be being buried under layers of unrestrained frequencies. The bass guitar has an absolutely huge tonal property to it, whose distorted crunch creates a prominent low-end presence. Godz Ov War Productions have released the physical version of the EP and can be found at www.godzovwar.com. For more information on LOATHFINDER, check www.facebook.com/loathfinder.