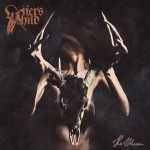 I heard a few things about LUCIFER’S CHILD during the last quarter of 2014. The news mentioned it was a new project created by members of highly acclaimed and legendary ROTTING CHRIST and NIGHTFALL. Some previews of their early material showed a mix of the classic Greek Black Metal trademark sound and melodic Death Metal. I was a bit skeptical about this release, I mean let’s be honest, even if the band has the ability to play some "fresh" Metal, people knowing the background of the musicians will set the bar very high for them as players and as a band. Now in early 2015 it was announced that a full length was going to be recorded, some videos showed the progress of the recording sessions and Dark Essence announced the release of the album for September 2015. The album cover is in short words amazing! Couldn’t get a better album cover that goes with the title and the logo of the band. The colours and meaning of the painting goes hand in hand with the idea of what the band wanted to display. But what’s inside this killer package? "The Wiccan" has 8 songs that will remind you why Greece has some great bands that set everything apart from what the rest of the world did / does. Here you have some catchy riffs in the same way their Greek peers crafted their sound and changed the Metal world for good (and evil), mixed with Gothic elements and a sense of melodic Black / Death vibe upon the whole record. I think the best way I can describe this album is by taking a few elements of the latest albums from those iconic bands. The riffing here is in the vein of "Aealo" or "A Dead Poem" (ROTTING CHRIST), tight and melodic with lots of mids, the bass and drums reminds me a bit more of what SEPTICFLESH did with "Titan", snap and compressed, while the vocals and overall atmosphere are more "Gothic" oriented, somehow reminds me of ON THORNS I LAY during the "Angeldust" era. So there you have it, if the latest albums from all the great Greek bands were not enough for you, give this album a try, I found it to be very enjoyable, different from what I thought it would end up sounding but in a good way. You can grab this record and know more about this great band here www.facebook.com/luciferschildmusic, www.darkessencerecords.no