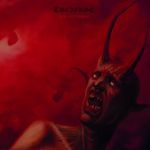 My sometimes rather sleepy former home town Bremen has something rather new to offer for all you lovers of the rude and brutal. LUCIFUGE was started in 2016 by Equinox, who still is more or less the only real member of the band. After a demo and two EPs (one of which was only digitally available), the year 2019 saw the first full length album from LUCIFUGE, entitled “Der Antichrist”. The album is available on vinyl, CD and tape, the latter two versions contain different bonus tracks as well. What can you expect from LUCIFUGE? Well, something damn fine, as long as you’re into old fashioned and rough stuff that doesn’t care too much for musical subtleties. The basis of the sound Equinox prefers is a mix of punkish energy and old fashioned Thrash and Black Metal vibes in the vein of VENOM, BATHORY or HELLHAMMER. Add a very healthy dose of MOTÖRHEAD to that mix and you’ll get a delightful cocktail. From the first riffs of ‘From The Cradle To The Grave’, LUCIFUGE don’t take prisoners and indulge in their sound with reckless abandon. And with a great variety as well, since the eight songs (plus one intro) on “Der Antichrist” are far from being all one and the same. The driving mid tempo smasher ‘Grand Declaration Of War’, for example, has a fine HELLHAMMER vibe, while ‘The Witch’ has an even ritualistic beat (URFAUST anyone?). With its myriad of short guitar leads and its main beat, ‘The Death Of The Gods’ reminds me of early MOTÖRHEAD stuff. And the closing title track is another more mid tempo based killer with an even groovy end. So all of this, with the devotion to the style, makes “Der Antichrist” an album worth listening to more than just once or twice. And Equinox is definitely not someone who rests on his oars, as the new year saw the release of the second LUCIFUGE album. But that is a different story. If you want to find out more, visit the band at https://lucifuge666.bandcamp.com or www.facebook.com/lucifugeblackmetal