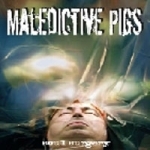 I’m not sure what to think about this new album by long existing German brutalists MALEDICTIVE PIGS… it’s already their fourth long player. And quite similar to the predecessor album “Bloodshed” I’m not really convinced by what they do nowadays. Their second album “Reborn” from 2000 was an awesome killer and I absolutely enjoyed their Death Metal a lot, which was influenced by old Swedish gods such as GRAVE. “Reborn” was full of crushing and devastating Death Metal hymns the way it was meant to be, absolutely blameless and right in your face and the vocals were so fucking cool and brutal. But then they changed their style into a more brutal, more modern, more US oriented direction… Although youl still find some old school influences now and then I would describe this as modern day Death Metal with very deep vocals which sometimes turns into frognoise. Okay, one might call me old fashioned and narrow minded. I guess that’s not that wrong, but besides changing their style the MALEDICTIVE PIGS lost a little bit the ability to write neck breaking songs or maybe they just got another vision how a brutal song has to be structured. A vision I don’t share at all. Sure they still know how to handle their instruments, they still deliver brutal non trendy music and “Soul Surgery” is far away from being a bad or boring album but I miss what they’ve created on “Reborn”… They definitely have their audience and everyone into guttural vocals, blasting sickness with hints of gore and grind should put “Soul Surgery” on his shopping list and should be pleased with this dose of brutality but as mentioned before I prefer “Reborn” which still is a killer album.