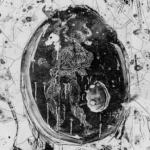 This is the debut album from this chaotic Black / Death Metal combo from Ireland. Their style is that of cavernous and suffocating Death Metal that is generally considered as something started by INCANTATION with its doomed atmospheres combined with bursts of speed and with an overall asphyxiating aura. It is usually combined with a murky and muddy production, but in this case the production is right on for the music style, it is the chaotic delivery and execution that gives this that atmosphere. Although there are layers and layers of noise, those that already follow the style will notice that there are some interesting riffs there and that there is even some more controlled and direct moments. Bands like ANTEDILUVIAN, DEAD CONGREGATION or MITOCHONDRION come to mind when listening to this band, but also some nodes to MORBID ANGEL in their "Formulas Fatal To The Flesh" and add to that some nordic Black Metal touches. This is the kind of record one needs to listen to more than once and the cacophonous nature might as well not be for everybody, yet the fans of this cavern Metal of Death are urged to listen to this under the sign of the mace. www.facebook.com/malthusiandm, www.darkdescentrecords.com