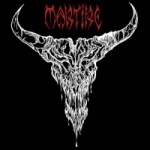 MARTIRE must be to the Aussie scene what SADISTIC INTENT are to the American; both bands threatened to release their albums for well over ten years. And while we still await "The Second Coming Of Darkness" with unimaginable expectations, the debut album from MARTIRE finally sees the light of day. For those of you who are unaware of this band, you should immediately sell all of your MYSTIC CIRCLE and INSANE CLOWN POSSE records and seek out MARTIRE’s earlier stuff. Riffs lash out in all directions like a swarm of angry hornets, while drums blast the listener into an addled stupor. I’m sort of reminded of earliest SADUS, INSANITY (USA), and some faint whiffs of MORBID ANGEL’s first album (but with predominant blastbeats). MARTIRE’s 1991 self-titled EP, and especially their split with ANGELCORPSE are lessons in unhinged savagery that has mostly gone underappreciated. As for "Brutal Legions Of The Apocalypse", I feel a bit torn. While it’s great to have the full length, MARTIRE has already graced us with a "preview" of this album – 5 tracks previously appeared on a 2004 split with THRONEUM. Also, the analog-yet-clean production leaves something to be desired (compare it to the flamethrowing, "nuclearrrggh" sound of the ANGELCORPSE split and you’ll see what I mean). The 5 or so new songs sound like MARTIRE reaching into musically less brutal areas (progressive?), even showcasing some lead-bass in the style of Steve DiGiorgio’s noodling. Despite its shortcomings, "Brutal Legions Of The Apocalypse" will still probably provoke you to domestic violence or road rage, so I recommend it to the more ravenous underground maniacs. Hopefully MARTIRE won’t make us wait so long for record #2. www.myspace.com/martire666, www.nwnprod.com