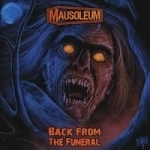 MAUSOLEUM
Back From The Funeral
(Razorback Recordings)
35:21min

From Windber, Pennsyvania, hails this now 3-piece old school Death Metal act called MAUSOLEUM that is full of relatively known ex-musicians from such groups as INCANTATION, MORPHEUS DESCENDS, NECROTOMIE and so on. The band has been around since 2001, and released their debut studio outing, titled "Cadaveric Displays Of Ghoulish Ghastiliness", in 2003. "Back From The Funeral" is these brothers of death 2nd studio recording, containing of 9 tracks altogether. The band calls their stuff ‘Zombiecult Death Metal’, which truly fits them like a nose into your brown hole; the primary concept around them is all about zombies, decaying cadavers, dark graveyards and stuff. That’s the real old school way what the early Death Metal used to be all about in the first place, right folks? But there’s just a bit more: MAUSOLEUM do sound like a little brother of Californian true gore masters, AUTOPSY. I mean, the demo days of AUTOPSY in particular. The music is raw, limb-heavy and pure old school Death Metal of those 1st two AUTOPSY’s demos vein. Hell, even MAUSOLEUM’s drummer and vocalist Rick "Slim" Boast tends to remind of Mr. Reifert very much vocally, which is quite amusing indeed. In fact, this is my first time when I hear a band that is so close to early AUTOPSY’s stuff – and I like really it in some peculiar way. The MAUSOLEUM members obviously are all big fans of AUTOPSY, and I guess they are not afraid of admitting that either. For what "Back From The Funeral" stands for, it stands for it proudly and firmly – and if its true purpose was just to pay a great homage to AUTOPSY’s direction, it definitely succeeded at that very damn well in my humble opinion. "Back From The Funeral" is also dedicated to the memory of their loving band mate Philip C Newbaker V, who died in March 2009 at Memorial Medical Center. R.I.P. For more info about MAUSOLEUM, check these zombiecult worshippers at: www.thezombiecult.us, www.razorbackrecords.com