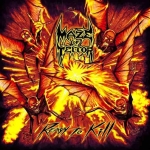 "Now, I become Death, the destroyer of worlds." With this quotation by Robert Oppenheimer, the "father of the atomic bomb", the album kicks off. Oppenheimer referred to the first man-made nuclear explosion in 1945 and the citation originated from the Bhagavad Gita, a 700-verse Hindu scripture in Sanskrit which came into existence in the third or fourth millennium before Christ (by the way, that is really old school!). Pretty interesting story, both Oppenheimer and the first atomic bomb and ancient sacred scriptures. But back to the first album by MAZE OF TERROR from Lima, Peru. Staccato riffing, high-speed drumming with lots of double-bass, a vocalist located somewhere between hate, wrath and anger. And, not to forget, an audible bass guitar giving the whole affair a solid basement. The influence of early works of band like KREATOR, DESTRUCTION or DARK ANGEL is most obvious. The ten songs sound awesome powerful and the songwriting is top-notch, it is simply outstanding. In my eyes MAZE OF TERROR are simply on the same level like the mentioned bands were back in the eighties. In an other review I have read the words "Much better you can hardly celebrate extreme Thrash Metal" and I totally agree with this statement. www.facebook.com/mazeofterrorthrash, www.empirerecords.be