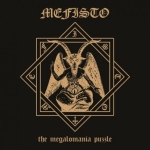 At first sight a strange output. Why re-releasing two nearly 30 years old demo tapes on CD by a Swedish band which split-up after these demos? But at second sight it really makes sense. First of all there is the historical aspect. At the time the demos "Megalomania" and "The Puzzle" were recorded (in the year 1986) there were, besides BATHORY and OBSCURITY, simply no extreme Metal bands in Sweden. While BATHORY became quite famous, MEFISTO never get much attention. Just because the time was not ripe for that kind music. Music which has never been done before and from now on developed to what later on was called Swedish Death Metal. There were no labels, no studios, MEFISTO never played live and accordingly due to the usual musical differences and health restriction the band was liquidated. It is wasteful to think about how well-known the band might have become if they released their stuff two or three years later, but they would be mentioned in the same breath as CARNAGE, NIHILST and GRAVE (founded 1986 as CORPSE). If you want to know more about Swedish Death Metal I recommend the book "Swedish Death Metal" by Daniel Ekeroth. In addition to this historical viewpoint – the music is simply great! A lot of SODOM influences ("Witching Metal" and "Victims Of Death" demos) like the vocals, the drums, the bass, the guitar riffs and melodies. Furthermore some Bay Area Thrash, an acoustic guitar part and a surprisingly voluminous, energetic and transparent sound. The material can easily compete with nowadays old school bands. "The Megalomania Puzzle" is completed by liner notes written by Jon "Metalion" Kristiansen of legendary Slayer Mag and an interview with the drummer of MEFISTO, Robban. Generally I am not a friend of talking about must-haves or essential releases. But if you have 10 Euro (the CD costs 9,99 €) left and call yourself a Death Metal lunatic, buy! Thanks to Vic Records for re-releasing these two demo tapes. A vinyl edition is also planned, so I guess all wishes are answered. For all additional information check out www.facebook.com/pages/mefisto-sweden/234630006720804, www.vicrecords.com