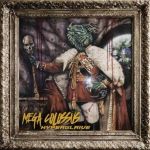 I’d like to reveal the little secret here how a certain record ends up being reviewed by a certain person. Usually, our big chief and editor sends a circular note to the staff writers with the stuff that ought to be reviewed including some information. Every writer who feels addressed replies, telling his wishes and possible substitutes. The choices made depend on, at least in my case, knowing the band in the first place. The next choice is a band I heard something promising of. And in the third place, I pick up bands with names that sound like I could like their music. A name like MEGA COLOSSUS was an extremely interesting one, since it hinted on extremely heavy and monolithic stuff, with an enormous power and epic moments. You might imagine my slightly shocked surprise when I, still not having done any research on MEGA COLOSSUS, listened to “HyperGlaive” for the first time. I have, of course, not expected some European sounding Power Metal. But I should have known better, since the album was released by German true Metal underground label Killer Metal Records. Yet good old Heavy and Power Metal naturally is not a red rag for me. And as soon as I started to adjust to that changed situation, I found access to the music of MEGA COLOSSUS. The six piece hails from Raleigh, North Carolina and features a triple guitar attack and is around since 2005 already under their old moniker COLOSSUS. The “MEGA” was added last year with the original release of “HyperGlaive” in order not to be confused with identically named bands from Mississippi and Missouri. Under that old name, they already released an album in 2008 and two EPs in the years between the two albums. And what can we expect from “HyperGlaive”? Well, the eight songs on the album have anything you can expect from a band from the US Metal underground in the last 25 years. Riffs in classic Metal style, rather progressive songwriting, high pitched powerful vocals and a huge amount of guitar melodies and double lead harmonies, in this case sometimes close to an overdose. The production and sound have a feeling of true underground and the independent spirit that was characteristic for the US Metal of the mid and late 1990s. This era in general is very striking for the sound of MEGA COLOSSUS, the years of independence and underground, when CDs often were released by either the bands themselves or tiny underground labels. Bands like DIVISION, FICTIONAL PRISON or GOTHIC KNIGHTS came to my mind soon, not specifically in musical terms but as far as the spirit of the music is concerned. That’s why songs like the catchy opener ‘Sunsword’, the progressive ‘Gods And Demons’ or the slightly awkward ‘You Died’ appeal to me and anyone who’s into so called “True” Metal for sure. More about MEGA COLOSSUS at www.facebook.com/colossusmetal, label contact: www.killermetalrecords.de