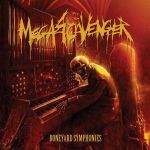 This is the fourth album by MEGASCAVENGER, a Swedish Death Metal band formed by Rogga Johansson, who is a most prolific musician with a large number of bands and projects, notably JOHANSSON & SPECKMANN (with four albums as well by now), with notorious Paul Speckmann of MASTER etc. Here Johansson sings and plays everything except drums (played by Brynjar Helgetun). Even though this is a rather straightforward and a bit formulaic Death Metal album, MEGASCAVENGER has served as a means for some experimentation by its mastermind in previous albums, including a large number of guest vocalists (such as Martin van Drunen, Dave Ingram and Kam Lee) and even strong Industrial leanings in the predecessor. "Boneyard Symphonies" still has many guest vocalists, but it’s a bit of a back-to-basics venture, in which Johansson descends into traditional Death Metal in the style of bands like ASPHYX, GRAVE, MORGOTH or even UNLEASHED. Mid-tempo, hammering Metal with downtuned, heavy guitars and angry singing. There are good hooks, solos and old school feel in abundance. I found myself quite enjoying simple but to-the-point songs such as ‘The Unexpected Journey’ or a tad more intricate ones like ‘Pandemic Rotting Storms’. The vocals vary because of the guests, and you are treated to a panoply of aggressive voices. But all in all the level is always very high. The drumming is usually rather simple although technical prowess becomes apparent in speedier songs like ‘Factory Standard Slaughterdevice’. This may not be very original, but as far as enjoyable, well-played old school Death Metal goes it surely delivers. So if this is your style of thing, I do suggest you get this from www.facebook.com/megascavenger, www.selfmadegod.com