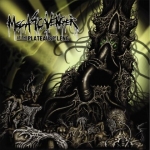 MEGASCAVENGER
At The Plateaus Of Leng
(Chaos Records)
40:21min

How many bands this guy Rogga Johansson is trying to create? Is he seeking for some world-record or something? Hard to tell. The fact is that most of all those bands are in the Death Metal reign and this one is no exception. And to be honest, this is probably some of the best material he has created in a while. If one knows this Swede, then we can expect mid tempo Death Metal most of the time, with a heavy crunchy guitar tone. Well, that is here too, and although he is also doing vocals as in many of the other bands he works with, this might as well be some of his better work, with some touches of Kam Lee and Barney Greenway. And the riffs, for some reason they have more of a catchy essence than I usually expect on the other bands he plays. Also, the lyrical concept on this one is more mysterious, more in a horror vibe with references to Lovecraftian tales. Overall, a solid effort, if maybe for my tastes they could add more speed to some songs, as the mid tempo usually sounds similar. Oh, and there are many guest vocalists in some songs which I will not tell you or I will have to asphyxiate and massacre you, just to name a few, and that makes this more interesting. One of the songs features a clear vocalist but with the same pounding brutal riffs, and let me tell you it sounds very good. If you like what this Death Metal warrior is doing, this is a must get. And even if you are not too fond on his previous works, this as well must be his best. This album was released in 2014 and the band seems to be on hold, hopefully they will rise soon again form their eternal sleep. www.facebook.com/megascavenger, www.facebook.com/chaosrecords