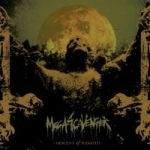 Let’s see… have you heard all PAGANIZER, RIBSPREADER, DEMIURG, THE GROTESQUERY, BONE GNAWER, REVOLTING, BANISHED FROM INFERNO, BLOODGUT, PUTREVORE, SWARMING, 11TH HOUR and CARVE albums? All mighty cool bands, you say, yet how often do you actually listen to them and which one album is better than the other? What that has got to do with this review, you may ask? Well, Rogga Johansson, the unstoppable Death Metal producing man-machine, is the main link between all those bands / projects. MEGASCAVENGER is yet another one of his ventures with a few well-known names involved on vocals and contributing guitar solos to the basic template of mid-paced murky Death Metal along the lines of BOLT THROWER, GRAVE and a touch of ASPHYX. Actually, with the BOLT THROWER missing in action lately, this can be the best alternative, if you wish to get your fix of pounding, plowing mid-tempo Death Metal, just listen to ‘Catapulted Through Aeons’ or ‘Descent Of Yuggoth’ to hear what I mean. ‘Smokescreen Armageddon’ and ‘No Haven For The Sane’ (featuring Paul Speckmann) are another couple standout tracks here which I really dig. Now the sound is heavy and pummeling, even sludgy at times, yet always retaining enought clarity to discern between the instruments, but this shouldn’t come as a suprirse, I’m sure Rogga by now has had developed the specific presets for each band he wishes to copy/emulate and just applies them whenever necessary. So when the last sounds of "Descent Of Yuggoth" fade into obscurity, I’m left with a feeling that maybe Rogga needs to actually contemplate the saying that "less is more" sometimes. On the other hand, MEGASCAVENGER delivers a few solid old school Death Metal tracks with an above-average songwriting skills which are fun to blast when downing some beers. So is this really a good album? Let’s just say I’ve heard much worse, so looking from that perspective – yes, it’s worth at least checking out. Don’t get your expectations too high and maybe it’ll last in your player untill the next Rogga’s project coming sometime in the next month or two. Judging by the names invloved, though, I was expecting much more this time. For more info check here: www.selfmadegod.com