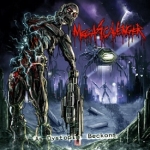 MEGASCAVENGER from Sweden is one of the dozen projects Rogga Johansson runs parallel together with his often used drummer Brynjar Helgetun. So the main direction should be clear. The guys seem to be active since 2012 under this moniker and with "As Dystopia Beckons" they reveal their third full-length album already containing nine tracks and thirty-one minutes running time. The opening track ‘Rotting Domain’ is a groovy straight in the face hitting Death Metal hammer with a really nice groove and Rogga’s wellknown deep grunts which also change into screams here and there (the album additionally features a couple of guest vocalists, a.o. Sven Gross of FLESHCRAWL, David Ingram, Jocke Svensson of ENTRAILS, Kam Lee and Adrie Kloosterwaard of SINISTER – Frank). Their Death Metal is pretty much old school based but with an industrial painting in the vein of FEAR FACTORY or even STRAPPING YOUNG LAD. Surely different as definitely Death Metal is their fundament but they incorporated some really modern guitar sounds and keyboards into their sound. Track four, ‘As The Last Day Has Passed’, is a big surprise as it starts very melodic and changes into real Death / Thrash track and surprisingly, Rogga changes his vocals into normal but aggressive singing completed with some high screams. This track is a really killer Death / Thrash hymn with a melodic guitar line before incorporating some industrial elements as well. ‘The Hell That Is In This World’ even starts technoesque before turning into a Death Metal wrecking ball with weird techno elements. The remaining tracks are similar groovy but all with elements of Metalcore, Industrial or even Techno but always Death Metal interpreted. The last albums of Rogga did not really catch me to be honest and even though this is not my preferred style normally, the groove and the incorporated elements somehow surprised and caught me (fans of the previous two MEGASCAVENGER albums will be surprised as well since this is quite a departure from their early, very straight ahead old school Death Metal style – Frank). "As Dystopia Beckons" with its tight running time is the right soundtrack to start the day in the car with and to get ready for the daily madness. A nice surprise and for Rogga’s fans worth to check out. More info can be found at the following locations: www.facebook.com/megascavenger, www.selfmadegod.com