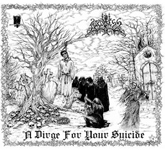 MIRTHLESS
A Dirge For Your Suicide
(Dunkelheit Produktionen)
38:55min

I find Funeral Doom to be a confining and often alienating classification; I can’t often convince someone who hasn’t heard them that seeing MOURNFUL CONGREGATION is a killer way to spend a Saturday night. What I wish was conveyed better was the genre’s goth tendencies as well as its departure from the Death Metal technical mindfucks and cookie monster growls or even Black Metal’s amorphous tremolos and wall of sound blurs. Don’t get me wrong, I have nothing about these characteristics as a general lover of Metal, however, I find that despite its dismal taxonomy, Funeral Doom has the potential to be enjoyed by a wide range of listeners. Lima, Peru’s MIRTHLESS incorporates a more varied breadth of styles than I would have expected. On the whole, the songs are slower and often seek a sort of "procession" of sorts, but a great deal of it transcends somber dirge. ‘Chapter I: Pantheon Of Disgraces’ features repetitive and somber riffs that escalate into some brief airier solos as well as two distinctive vocal styles, one deep and one more akin to a Black Metal goblin style. The escalation continues in ‘Chapter II: Prelude To Doomsday’ where somber, clear vocals seem to transport the sound to a gloomy cathedral only before devolving into a speedier frenzy of death-tinged Doom. Additionally, while I was busy being hung up on the characteristics of Funeral Metal, I couldn’t help but get brought back to earth by ‘Chapter III: A Dirge For Your Suicide’. It opens with eerie bells and a sound sample of people lamenting and mourning someone’s death. If you didn’t think this album was gloomy enough, well, here you go, because one thing I seemed to have forgotten was how different funerals and mourning can be across various cultures. While we like our buttoned-up processions and sterile, emotionless ceremonies here in mainstream USA, there are people who go to funerals and literally bawl and scream; I suppose they might have the right idea about making Funeral Doom Metal in this sense. The music that follows this portion is also a beautiful oxymoron of uplifting depression, powerful riffs fluctuate with more lamentation singing and the song finishes with a sparkling solo. Ultimately, it challenges its self-proclaimed genre by expanding the characteristics of sorrow; while we like to hover in it, stew in it and let it hang in the air like an overactive fog machine, there is also something to be said for trying to reach a catharsis because that’s ultimately what mourning is, and mostly why we lament. MIRTHLESS aims to express this musically and encompass various styles while doing so. The result is not only the creation of a somber atmosphere, but the emotions aching to lift it. http://mirthlessdoommaniac.tripod.com, www.myspace.com/mirthlessdoommaniac, www.dunkelheit.cc